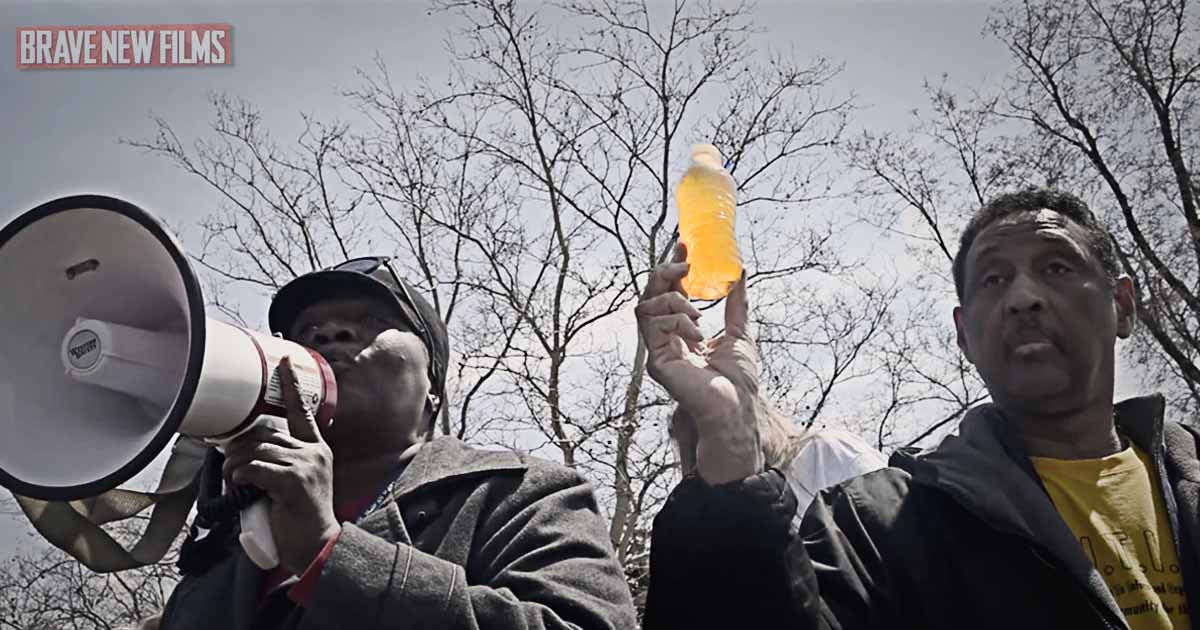 Brave New Films is at it again. The activist progressive media effort, known for promoting progressive changes and amplifying voices and views generally ignored by mainstream media, is turning its lens toward Flint, Mich., and the country’s looming clean water crisis.

Potentially thousands of people — many of them children — could be affected negatively for the rest of their lives because of the chicanery and lack of caring of their governmental representatives. High on the list of inhumanity are Michigan Gov. Rick Snyder and other state and city officials who, in the interest of saving money (and just not giving a damn about the little people) switched Flint’s drinking water supply to the heavily polluted Flint River, which contaminated the city’s water system with high doses of  lead. They did this in 2014 without notifying residents, who had no idea their water was poisoned for 18 months.

Lawsuits aplenty are being filed to hold the government accountable. So far, the system is busy passing the buck: On Tuesday, a federal judge in Detroit dismissed a class action lawsuit seeking $150 million in damages for the victims. U.S. District Judge John Corbett O’Meara ruled that he had no jurisdiction in the matter and that plaintiffs would have to file suit in state court. That ruling means other cases related to Flint’s water may be dismissed as well.

Brave New Films’ Make #PollutersPay site notes that while officials in Michigan (who made sure they had clean water to drink) refuse blame and while judges look for someone else to give redress to those impacted, the people of Flint have suffered terribly. “Residents have lost huge amounts of wealth from declining health, lost wages, decreased business, and tanked home values. We cannot sit by while politicians like Gov. Snyder allow communities like Flint to be the dumping ground for waste and a ground zero for environmental experiments.”

And that brings us to BNF’s new video.

Here’s what BNF has to say about its latest project and how it needs all of us to take action for good:

Where families living in poor communities can go over a year and a half being poisoned by the water their city is providing them with.

But, this is also American in 2016, where communities are coming together to fight back and hold those in power accountable for this gross negligence.

Watch and share our latest video. We were on the ground in Flint with others – like Mark Ruffalo and Van Jones – who are as infuriated as we are about this happening in our very own cities. Don’t let the people of Flint – or any other city – go another 18 months without the most basic, vital resource of safe water. Join us today to demand that Governor Snyder and the others responsible #FixFlint!

I’ll leave you with one last thought as you ponder whether you should get busy and speak for the people of Flint. Environmental Protection Agency records show the problem of lead-contaminated water goes far beyond Michigan.

An analysis of U.S. Environmental Protection Agency data showed about 350 schools and day-care centers failed lead tests a total of about 470 times from 2012 through 2015.

That represents nearly 20 percent of the water systems nationally testing above the agency’s “action level” of 15 parts per billion.

One water sample at a Maine elementary school was 41 times higher while another at a Pennsylvania preschool was 14 times higher. And a sink in a music-room bathroom at Caroline Elementary tested this year at 5,000 ppb of lead, results released by the school system show.

That’s the cutoff where the EPA labels a substance “hazardous waste.”

The report goes on to say that officials can’t even tell you how widespread the problem is.

…[A]t this point it’s impossible to know how big because the federal government requires only about 10 percent of the nation’s schools and a tiny fraction of day cares — the 8,225 facilities that run their own water systems — to test for lead at all.

The EPA estimates that about 90,000 public schools and half a million child-care facilities are not regulated under the Safe Drinking Water Act because they depend on water sources such as municipal utilities expected to test their own water. That means parents have no assurance lead isn’t seeping into children’s water from a school building’s pipes, solder or fixtures.

Watch and share Brave New Films’ video. Demand officials in Michigan #FixFlint. And do some research into the quality of drinking water in your own hometown — before you take a shower or fill your child’s sippy cup.